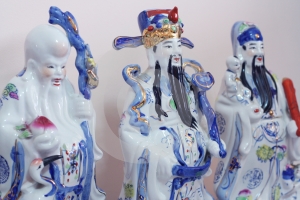 About Daoism and other Asian beliefs.

Daoism (Taoism) is a group of ancient Chinese practices defined by belief in the Dao 道, the formless, limitless aspect of the universe that underlies all of creation. Daoists study and strive to act in harmony with the rhythm of this cosmic force by reaching a high level of physical and spiritual well-being.
(Zhou Xuan Yun – Daoistgate)

A good website on Daoism and more (with music) is: Daoistgate.
Wikipedia on Dao. According to the Daodejing, the DAO that can be named is not the DAO.
But allthough DAO can’t be explained it is open to personal experience and can actually be understood through this.
Experience and knowledge lay in observation and meditative practice, which is where the DAO will begin to unfold.

DAO is formless because it already existed before anything had taken shape. The Dao may include all forms: it is both formless and multiform, and changes according to circumstances. No one can claim to own or know. Source of all, it is inexhaustible and endless. DAO reveals itself and works through Dé 德, virtue (or activity, as a power to achieve a desired effect), including all life. The Daodejing emphasizes the necessity of following the natural order of the DAO. Maintaining this is sufficient for ones wellbeing.

Daoist cosmology:
All cause and effect comes from Dao.
Before Dao there was: Wu-wu (Not Nothing).
After Dao appeared there came: Wu Ji (No Limit).
From Wu Ji, evolved Hùndùn (混沌 Primal Chaos).
In Hùndùn, Tai Ji (太极 Great Pole) became the first fixed point in space and time.
From Tai Ji came the Tai Yi (太易 Great Change)
Tai Yi went through two stages…

Xing and Qi combined to create…

The first substance has Yin and Yang.

The living symbol of yin yang. The centers of yin and yang are not shown to be in a perfect horizontal or vertical line as these positions contain a kind of stagnation and therefore death. The living symbol shows the everlasting cooperative interaction between yin and yang. Although the natural order of the two, according to the Yì Jīng (I Ching) is “dragon over tiger” meaning that heaven (yang) is over the earth (yin).

In Pinyin, Chinese, English and German: Dao De Jing.
Lots of info on Daoïsm is to be found here: Daoïsm.
More info can be found here: The Golden Elixer.
Also in English: The three principle texts of Daoïsm.

Another great sage of Daoïsm was Zhuang Zi.
The complete works of Zhuang Zi translated by: Burton Watson.

Lao Zi
Lao Zi was a great philosopher, thinker, educator, and the founder of the Daoist school of thought in ancient China.

Lao Zi was not his real name, but an honorific given the sage, meaning “Old Master.” The specific date of Lao Zi’s birth is unknown. Legends vary, but scholars place his birth between 600 and 300 B.C.E. Lao Zi is attributed with the writing of the “Dao De Jing,” the scripture for the Daoist school.

“Dao,” frequently written as “Tao,” literally means “The Way,” “The Great Ultimate,” or “The Secret of the Universe.”

Lao Zi’s wise counsel attracted followers, but he refused to set his ideas down in writing. He believed that written words might solidify into formal dogma. Lao Zi wanted his philosophy to remain a natural way to live life with goodness, serenity, and respect. Lao Zi laid down no rigid code of behavior. He believed a person’s conduct should be governed by instinct and conscience.

Daoism holds that the universe, far from being a complex web of tangled events, is actually very, very simple. All forms of matter and being are merely manifestations of Yin (female cosmic element) and Yang (male cosmic element), surrounded by Qi (energy).

Lao Zi believed that human life, like everything else in the universe, is constantly influenced by outside forces. He believed “simplicity” to be the key to truth and freedom. Lao Zi encouraged his followers to observe and seek to understand the laws of nature, to develop intuition and build up personal power, and to use that power to lead life with compassion and without force.

Legend says that in the end, Lao Zi was saddened by the evil side of mankind and set off into the desert on a water buffalo, leaving civilization behind. When he arrived at the final gate at the great wall protecting the kingdom, he stopped for a cup of tea with the gatekeeper. The gatekeeper was so stunned at Lao Zi’s wisdom that he begged him to jot down a few revelations for posterity. Lao Zi grabbed a brush and dashed off a few ultimate truths before heading on his way. The result was the 5,000-word philosophical poem in the verses of the “Dao De Jing,” in which Dao (The Way) is expounded. Next to the Bible, this ancient Chinese text is the world’s most translated classic.

As for the reclusive Lao Zi, he ended up in Heaven. Now deified as one of the San Qing (the supreme trinity of Chinese Daoism, known as The Three Pure Ones) under the name Lao Jun, he advises the Jade Emperor on do-nothing policy and spends eons refining doctrine.

Rene Goris posted this correction:
Nowhere is stated by Lao Zi that Dao can not be mentioned, there is no taboo on the word. Dao is difficult to explain but nowhere is stated that it cannot be understood. In fact Lao Zi tells us that understanding Dao isn’t that difficult. The difficulty lies in realisation of Dao in ones behaviour, because it needs lots of discipline to do so and not just a mere ‘not doing’ and ‘leave things as they are’ which is the laymens behaviour towards Dao. Additionally, Dao is formless because it is present in everything. It does not form, but gives form to things because it is patterning the process of historical causality and therefore is limiting and directioning the possibilities for certain things to happen.
Thanks,
Rene.
(translated into English by: Qi Bo Te)

For those interested in esoteric Daoism visit: Esoteric Dao

What the I Ching says about today:

What is DAO?
According to the Daodejing and the Zhuangzi, the Dao cannot actually be named and is beyond anything that can be grasped or delimited, but is open to personal experience. Both texts favor an apophatic (The Highest can be known to humans only in terms of what It is not) approach that was entirely absent in the other teachings of their time. Having no form, because it exists before anything has taken form, the Dao can take all forms: it is both formless and multiform, and changes according to circumstances. No one can claim to possess or know it. As the source of everything, it is inexhaustible and endless; its Virtue or Efficacy (Power or capacity to produce a desired effect )(*de德 dé / virtue) Dao and of Nourishing Life (*养生 yǎngshēng / maintaining good health, raising a child or animal) maintaining that this is sufficient for one’s own well-being.

Conclusion:
– The Dao: is apopathic. It can be known to humans only in terms of what It is not.
– The De: is its Virtue or Efficacy. Its Power or capacity to produce a desired effect.

About 道家 Dàojiā and 道教 dàojiào:
Daojia (jia means family) is philosophical Daoism so if you’re Daojia then you philosophize about Dao.
Daojiao (jiao means education) is religious Daoism and if you’re Daojiao you have vowed to follow the teachings of DAO.
Jiao can be seen as ‘learning inside the gate’ and jia ‘learning outside the gate’.
If Daoists speak of nature they mean 德 dé (the virtue of things) or 理 lǐ (the principles of things)

Daoism more or less says that our opinion does not matter, so why talk about Dao?
dào kě dao*, 道可道，a dào that can be defined,
fēi cháng dào. 非常道。is not the eternal Dào.
míng** kě míng, 名可名，concepts that can be conceived,
fēi cháng míng. 非常名。are not eternal concepts!
(the first four lines of the Daodejing).

* A word play with two meanings of 道 dào.
** literally: Names that can be named are not eternal names.

Note:
A Dào that you could explain would not be the timeless Dào. Concepts which you can conceive are no timeless concepts. The beginning of the world is unconceivable, conceivable only as the myriad thing’s origin. Therefore: Free of permanent desire, so you behold the internal secret; with permanent desire, you behold the outer charm. Both aspects result from one and are just named differently, their common origin, however, remains unfathomable: unfathomable and even more unfathomable – the Gate to all mysteries.

Wúxīn 无心 = unintentionally / not in the mood to. Litterally: negative / not + heart / mind / intelligence / soul.
This non-intentionality, allthough the literal meaning says no-heart, is not void of heart. It is non-intentional because of the emotions of the heart are controlled and not allowed to take the upper hand.
Wúwéi 无为 = the Daoist doctrine of inaction / let things take their own course / laissez-faire.

Now it looks like the daoist path to follow would be the latter two. However this is not true.
The Dao is none of the above mentioned. And allthough wúxīn is in closer harmony with Dao for Dao itself there exists no distant or nearby.